The Creepy Graveyard in Nipigon

I miss Jay. He's honestly the very definition of a good man. Hopefully Tamara and I are able to visit again next summer and we'll all go kayaking or camping or something.

Despite the tiny population of Nipigon we somehow found Couch Surfing hosts. We stopped of at the Tim Hortons for dinner and began a conversation about our travels with a group of friendly locals. We told them we were Couch Surfing tonight at a young couple's place, and they asked us what theit names were. We told them and learned that they were actually the landlords of the couple we are staying with! Small town indeed.

It turns out the couple we're staying with is also hosting and American girl who is biking (on a motor bike) along the perimeter of Lake Superior with her little dog Eli. She keeps him in a doggy backpack and straps goggles onto his eyes as she speeds down the highways. He's so freaking cute. These past couple days have been quite dog themed. Our hosts Maria and Al also have a couple adorable dogs and it really makes me miss Teddy.

They cooked us up some burgers and drove us around Nipigon shortly thereafter. The town used to have a couple mills, one of which recently burned down and killed a huge part of the economy. One was a pulp and paper mill that went bankrupt and the one that burned down actually specialized in making hockey sticks.

Along the Nipigon River is an old graveyard that marks the resting spots of old railway workers who died a very long time ago. It's a strange graveyard because the graves aren't really marked with names or anything, but rather their resting spots are marked off in rectangle chain fences. Kinda sad actually.

Tomorrow we're heading 180 km to Marathon. It's supposed to be really scenic but rather treacherous. I'm not looking forward to it.

Please spread the word about or Sick Kids page if you can, and please make a donation if you haven't already. It's been quite dormant for a while now and John is beginning to throw tantrums.

Today's picture is of a morbidly obese seagull we saw in Thunder Bay. I tried to scare it off but it was to heavy to fly away. It was way fatter than it looks in the picture. Enjoy. 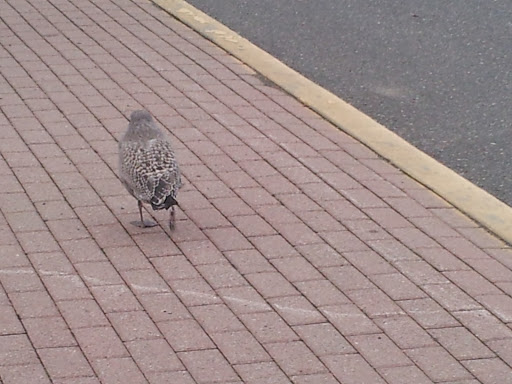