I have a love/hate relationship with Thunder Bay. Sure, it has a cool name and is the home of Jay (my awesome old landlord) but apart from that it has little going for it. Take for instance, the roads.

We cycled in at around 5:15 pm. As we approached, the roads quickly turned to crap. Literally. Well, actually no, not quite literally, but almost. There was a 5 kilometer stretch of just gravel. Sharp, uneven gravel. There were potholes. Horrible, painful potholes. It felt like we were riding jackhammers in to town. Oh, and I mustn't forget the tractor trailers zooming by kicking up storms of dirt which blinded us and clung to our disgusting sunscreen and sweat laden skin. Remarkably we emerged unscathed. I'm quite shocked we didn't blow a tire.

It's really nice getting to see Jay again. The moment we arrived he began to grill up some burgers and sausages, and introduced us to his new tenant. His good friend Harris was also hanging out because they'd just gotten back from playing bike polo. Bike polo is exactly what you'd think it is - it's polo on bikes. It's played on a cement court and the objective is to use your mallets to whack the ball into the opposing team's net. You aren't allowed to let your feet touch the ground. If you do, you're temporarily out of play until you touch your mallet to a target at the side of the play area to become active again. I played this once with Jay last year. It was fun, but I was atrocious at it. It also seems remarkably dangerous.


Jay's new roommate has a playful little puppy named Davy Crockett. It's absurdly energetic and cracked out. It played with me for a while, but eventually drew blood from my pinkie. Puppy teeth are freaking sharp, and the cocaine that Jay undoubtedly fed it must have given it superhuman strength with its feelings of grandiosity. Ouch!


We then took a cab downtown and visited a few bars. Jay bought me a fair amount of beer, and I got a fair amount of drunk. When we got back, that coked out puppy began attacking my face and I began laughing to the point of pain. Jay put on Bill and Ted's Excellent Adventure for us to watch. He seemed to think that it was sacrilegious that we hadn't seen it yet. After about ten seconds of watching, I quickly fell asleep.

We are now officially in Eastern Standard Time now. Feels good to be in sync with all those people in Toronto whom I care deeply about. There seem to be cool milestones like this every couple days, and they feel grrrreat. 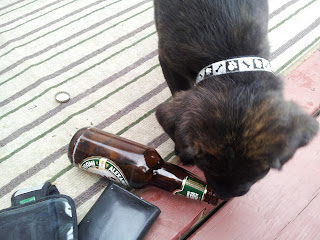 Davy Crockett is at least an alcoholic 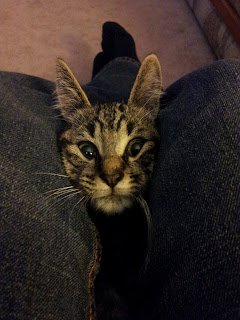 The cat is at least as coked out as the dog
Posted by Unknown at 08:19