We got to Brandon around 2:14 pm today, and despite my pleading to go further to Portage la Prairie (another 129 km) John wouldn't have any of it.

As I cycled on to a sidewalk to ask for directions to downtown, I got another flat and tire due to a broken bottle on the sidewalk. It put me back $40. Still, I saved some money because the cycling shop sold the tubes to me at cost. Nice guys.

After some exploration, we went to Little Caesars for a mediocre pizza dinner. I wanted to save some money after my stupid monetary setback. It was a decent deal.

After that we waited for the young lady whose place we're staying at tonight to get off work. We met her at a café and cycled with her to her apartment. It's on the top floor of this really old house with unconvincing wooden steps. If a morbidly obese person were to try and make their way up they'd surely fall through. Regardless of the misfortunes of hypothetical fat people, the place is beautiful and has a great view.

We eventually made our way downtown with Ashley to a latino music festival. Apparently Brandon has lots of latino people who work at the Maple Leafs meat factory, and who love to celebrate their culture downtown. Everyone was having a blast, but the mosquitos were dining on our flesh and I so after a while we went to a pub with live music.

The band itself was decent at best but had lots of stage presence and energy so we were quite entertained. I wish I was a rock star.

Now I shall sleep. Hopefully John doesn't talk in his sleep tonight. Last night he scared the hell out of me. It sounded like he was pleading for his life. 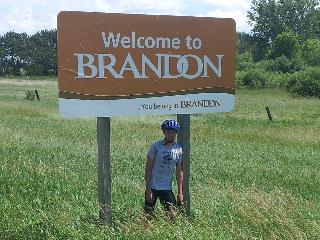