Rather than cycling Canada again this summer (which would be rather redundant and silly methinks), I'll instead be cycling across the United Kingdom with my friends Sara Yong, Adam Brochu, and Eden Sanger. Please be sure to check out that blog at avoidingsheeponbikes.tumblr.com . I'll be sure to keep you entertained.
Posted by Unknown at 23:04 No comments:

Alright everyone , this will be my final blog post, and yet only my second post. Today is the first day after cycling across the country , unfortunately Matti had his flight at 4:30 so,he really did not have a chance to do much.

Today started with Matti and myself going Velma's for Toutons, which is a fried bread that is covered in molasses or syrup for breakfast. Mayo , the cool guy we are staying with, said that is one of the foods that Newfoundland is famous for and it was delicious.

Afterwards Matti did who knows what( read his blog post, maybe it fill you in?!), and I cycled to Cape spear which apparently is the most eastern point in Canada, as well as north America. It was just over 15 km away but the path had some big and really steep hills which was a pain, but it was well worth it in the end.

Sadly I was suppose to go whale watching but it was canceled because of the weather :(  Instead I went to the Newfoundland and Labrador heritage shop where I got my my souvenir for Newfoundland. In every province I have brought a souvenir back to remind of them. In Newfoundland I got a 50 cent coin from Newfoundland before they were part of Canada, so it says Newfoundland instead of Canada.

This trip has been spectacular, a lot of great times and amazing memories. I know I haven't not posted very much to the blog but if you would like to see pictures or hear some stories, I would be glad to talk to anyone about whatever you're interested in or curious about. I appreciate all the support and encouragement and I will see you when I return.

Whaaaaat!? This is crazy!

We cycled about 130 km from Argentia to St John's, our final destination, in about 6 hours. Newfoundland is beyond gorgeous. It was a tough and hilly day, mostly against the wind, but as my friend Ethan put it, "Newfoundland is the perfect end credits" to our journey. As we cycled in to St John's we were met with green rolling hills that were hosts to boulders and glimmering lakes scattered throughout. It really was breathtaking.

We got to Mayo's place around 6:30 pm, quickly showered and went out for our final meal together. We found a place that served excellent Newfie cod, and possibly the best soup I'd ever had: a succulent spicy crab chowder. Lordy was it good.

Finally, we celebrated our accomplishment with Mayo and another surfer he was hosting, Bobbie, on George St. (a street that's famously crammed with bars). We attended a "Screech In" which made us honorary Newfies. It came complete with a certificate that I shall proudly mount on my bedroom wall.

The ceremony involved a charismatic Newfie fisherman official with a really thick accent. He spoke really fast and led us in some traditional Newfie chants and songs before having us all "kiss the cod", eat some balogna, repeat an oath and take a shot of screech rum.

We then hopped from bar to bar with our new Newfie friends and drank like true east coasters. All the bars on George St seem to try and out-compete one another and so there were fantastic deals to be had. Many places had three drinks for $5. The beer here is great. Mayo's friend Matt bought us both celebratory beers from Quidi Vidi brewery. The beer is called 1892 and commemorates the year of the great fire in St John's. It's a great beer - probably ranks number four or so on the list of best Canadian beers.

We then waddled home and I wrote a really bizarre "post-George St." letter to Mayo. I read it this morning to much confusion. I can only imagine how confused Mayo must have been.

All in all, it was a great final night. I'm now off to the airport and should arrive home by 9:15 pm tonight. Thank you so much for reading, and for your amazing support. It means a lot to both John and myself.

Stay tuned for a final post by John either later today or tomorrow. Lucky bastard is going whale watching. We'll also be posting a best of/worst of list, and a page of stats in the coming weeks.

Thanks again for all your support.

It's almost done. We're drifting closer to shore with each passing second - closer to the end. As we sail along the shore of Newfoundland into Argentina, I'm put into a pensive state, and find I'm already reflecting nostalgically upon the trip which isn't yet done. I can't wait for whatever is next.

This Boat is Stupid

It's okay though because it's pretty radical in here. We'll be able to sleep on a couch somewhere rather easily I'd imagine.

The ride should last about 14 hours so we should arrive in Argentia by about 10:30 am tomorrow. Hopefully we'll get to St. John's at a decent time, as I'd very much like to check out George St. It's only about 140 km so it shouldn't be too bad.

We're about 140 km from the end, yet I feel as if this is just the beginning. 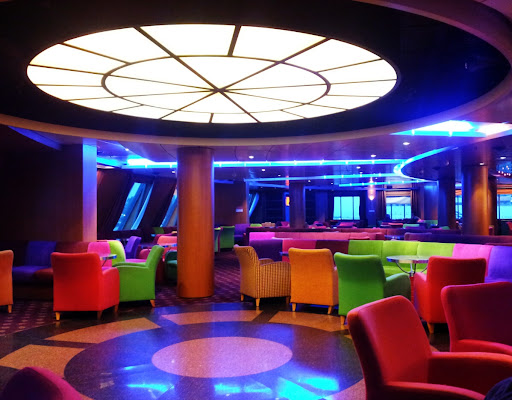 We left rather late today to check out the Cabot Trail. On our way there we stopped in a small town called Englishtown which was, fittingly enough, home to at least one English lady. This particular English lady worked at a small restaurant and whipped up some poutine for me to eat on this authentic English double decker bus. What a cool town!

We then took a ferry across the river to the Cabot Trail. The ferry ride was honestly about a minute long. I think the total distance was about the length of two ferries end to end. Why they don't just have a bridge is beyond me. It's probably because the ferry fare is the only thing that brings money into the town (aside from the double decker restaurant of course). It would take them five minutes to make a bridge.

We didn't really cycle much of the trail but what we saw was indeed quite beautiful. It's a shame we don't have time to do the whole thing but I'm sure I'll be back here again some time before I die.

When we got to the B&B, we walked town to a water hole under a small bridge and I had a swim. This upset the troll who demanded I leave at once. I begrudgingly obliged. It was far too cold anyways. It was refreshing, but cold. It was probably full of troll pee (I hear their pee is cold).

We cooked our own dinner for the first time today. Boy, we're such grownups! The cool dudes with funky mustaches who run the B&B let us use their kitchen and even offered us some expired parmesan cheese to go with our pasta sauce. It was actually awesome.I obviously had to add hot peppers to the dish.

Tomorrow... well, tomorrow we'll be catching a ferry to our final freaking province. Our final, freaking, province. Newfoundland here we come!
Posted by Unknown at 18:02 No comments:

We cycled about 155 km to North Sydney today. It was extremely hilly for the first half of the day, and there was a very light spray of rain for the first two hours. Fortunately, it didn't linger, and disappeared completely.

It was yet another scenic day. I'd even say it ranked somewhere in the top five in terms of Canadian dazzle. There were many fishing boats as we cycled along the coast, which really helped to highlight the charm of Cape Breton. I'm actually rather glad the day was quite grey - I feel like our time out east wouldn't quite be as authentic without some cloud.

We got to our host's place rather late. He's this super cool farmer who owns one of the biggest chicken farms in Nova Scotia. He had this really intricate and detailed mural painted in his garage that was inspired by the song Somewhere Down the Crazy River. It's littered with references to the song. Can you spot them? 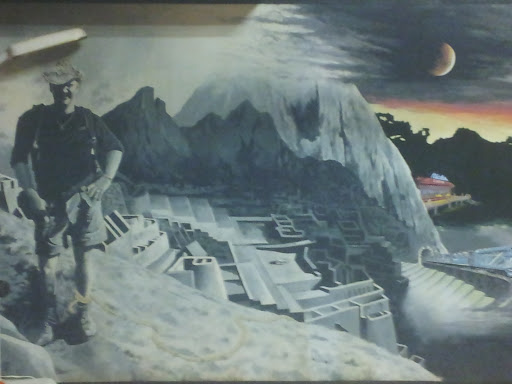 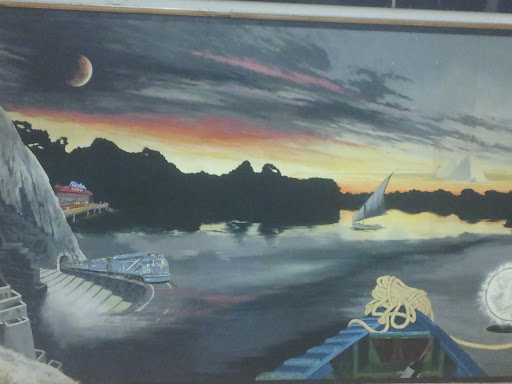 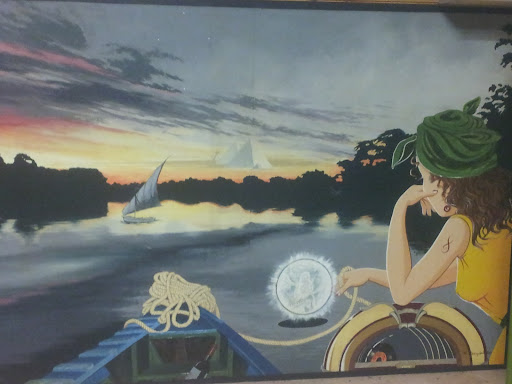