Cape Breton and the Fiddler

We woke up today slightly nervous about the rain. As we ate breakfast, our lovely host, Jane, boiled us some eggs for the road. She seemed to live quite the adventurous life. Her and her husband work on cruise ships, and are very well traveled. It seems like quite the ideal job.

We made way to Port Hawkesbury and hoped that we'd have a place to stay when we got there. Steve (our host in Charlottetown) has grandparents that live here and so he tried contacting them for us so that we could stay with them. Unfortunately, they weren't able to host us and so we scrambled for a place to stay.

Initially, it didn't seem like we'd have a place because all the motels and B&Bs were either way too expensive our had no vacancy. I called back a B&B that John had tried earlier, but this time asked instead if we could give them money to camp outside and use their shower. The lady told us to come by and that she'd try and make something work. She offered us a room across the street from the actual B&B that they usually don't rent out. The owners apparently don't think it's up to standard. We found it perfectly charming - it had a kitchen, a washroom, everything we needed. We gave her $20 under the table so that she could pay the cleaning lady to clean it without the owners ever knowing it was occupied. She was super nice and sympathetic.

It was supposed to rain and thunder shower all day today but we only encountered about forty five minutes of light rain. We lucked out again.

After a quick shower at the B&B (I was covered in dirt from John's tire which splashed me quite a bit) I made my way down to a fiddle performance by a guy called Ashley MacIsaac. Every Sunday night in Port Hawkesbury, they have a free concert by the water. This guy was absolutely masterful I'm his workings. His speed blew me away. I'm very glad to have caught it.

It really feels East Coasty here on Cape Breton Island. We're right by the ocean and there are lots of fishing boats and beautiful cliffs. I'm sad it's all almost over. 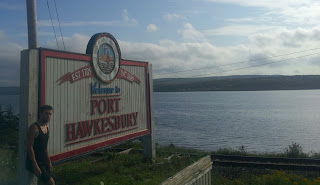