So I got up really early this morning to make my 11:10 am tee time at Crowbush Golf Course on the north eastern coast of PEI. It's apparently the best course to golf here in PEI and has hosted several golf championships. It's understandable - it is a really beautiful course, it's just darn expensive.

I had to cycle 40 km to get there which means I had to leave around 8:30 am so that there was some buffer time just in case winds were bad or the terrain was hilly. I was paired with these two outstanding players. One was an elderly gent who was a course member, and the other was his friend from the states. I think they resented the fact that I used a pull cart instead of a golf cart (which would have been an extra $40 on top of the $185 I spent on the green fee and club rentals). As a result, the round went rather slow. Towards the end  of the round, they had me hop on the back of the car while they pulled the pull cart along side. Weee!

The course itself is stunning - it's right on the water with amazing views of the sea. When I was done the day, Gavin (the elderly gent who was a member) tried to get them to refund some of my money. He's a well known and well liked member, and so I cautiously hoped that his authority would hold some sway. Sadly, they didn't give me any money back, but instead offered me a free Crowbush hat when Gavin told them that I'd cycled all the way from Vancouver just to play golf at Crowbush. I appreciated him stretching the truth, but alas I don't ever wear baseball caps. I may give it to my dad if he stops beating me someday. Unbelievable right? Even at 25, my dad still beats me. Dad, if you're reading, stop beating me and you get a cool baseball cap from Crowbush.

I cycled back to Charlottetown and met John and Steve at a restaurant downtown. I ordered a beer while they had dinner. We each ordered PEI oysters which had surprisingly little taste. They just look so freaking unappetizing. Seriously, who in their right mind thought, hmm, yes... this looks absolutely edible and delicious. Let's slurp it down our throats... ? I'll never have an oyster ever again simply because they look atrocious. It's kind of like Celine Dion - I simply can't stand her because of the way she looks when she sings. She's a great singer, sure, but her singing face is just awful.

In other news: John updated the blog! I'm excited to read his post. 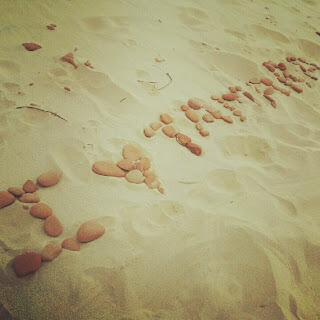 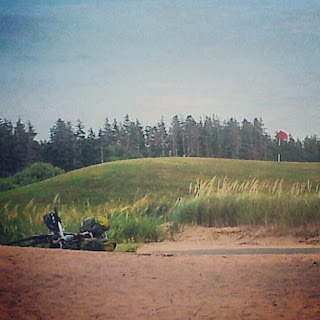 (diclosure: my father only beats me at golf)