Tomorrow could potentially be the toughest day yet and so we opted to stay in Golden for the day. We'll be in either Banff of Canmore tomorrow.

John is sitting next to me chewing loudly. If he gets murdered this summer that will be why...

Today we bought some Magnesium for our knee and muscles because apparently it helps with the pain. Tomorrow we should be fine although it's  supposed to rain again. Boo...urns.

We stopped at a couple cool shops today including a candy shoppe where John bought some fancy raspberry marshmallows.  John also lost his London Fog virginity today. He found it quite delicious.

I got a cool souvenir for whoever wants it: it's a first nations medicine pouch with medicine in it. Any takers?

We ate bison burgers for dinner which were delicious and only five bucks! Amazing deal, especially since it was a thousand times tastier than McDonalds and cheaper too. Somehow I've elected McDonalds as the standard which clearly should not be the case.

Today I tried Atilla the Honey from Mt. Begbie Brewing Co in Revelstoke. T'was really good and crisp, and easy drinking but lacked any original flavours. Very solid beer but not quite my favorite yet.

That poll on the side seems quite conclusive: John is most definitely a birthday cake. Poor guy (especially with his hobo beard which is coming in quite hoboly). I invent adverbs in THIS blog. Go me! I'm so spunkjazculous.

Below is a picture of a house in Golden that is also a train.

John and I are actually very disappointed because all the pictures of Golden show a beautiful turquoise river cutting through it, but this river is most definitely brown and so we want or money back. It's probably all the crazy rain, but still. The river should learn how to negotiate with the rain and say things like, "Yo, rain... I'll let you flood me witch yo crazy rain as long as you preserve ma beautiful blue colour". Without such negotiations I feel like the rain is raping the river, which is wrong. John please arrest the rain.

In other news my talented girlfriend Tamara graduated from college today and is surely off getting drunk somewhere right now. Huge congrats to that silly and beautiful girl.

Thanks for reading, and thanks to all those people who have linked to us and our donation page. It means so much! We feel so supported! 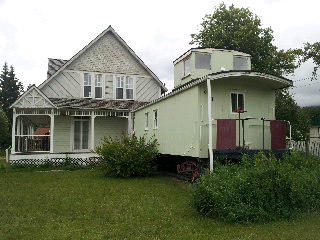 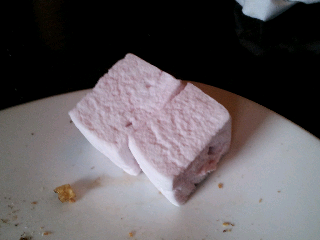 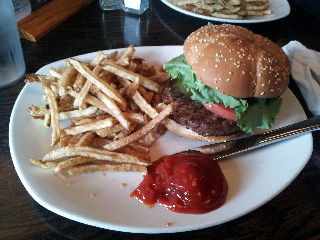