Before we left Canmore, I got my knees checked out by the doctor. She told me to stretch them more and to use leg warmers to prevent muscle tension there. My genius sister was right: it's my IT band that's been hurting me. The guy we're staying with tonight is offering me the leg warmers he used to use when he cycled regularly. He won provincials you know. Cool guy.

We cycled to Calgary today and accidentally ended up way north of our final destination. We had to cycle way the hell down south to our shelter for the night. A cop stopped us as we cycled through the city to remind us to cycle single file (which we were already) and we asked him how to get south. He directed us to this super busy street that was terrifying to cycle on. Apparently cyclists aren't even supposed to cycle on it (says the guy we're staying with). For a short while we had cars zooming by on both sides of us. Why a cop told us to take it is beyond me. He probably sensed we were liberals.

The Alberta foothills are actually quite a pain in the ass to cycle through. They're steep, and there are mosquitos everywhere in Alberta. Everywhere. Whenever we stopped for just a few seconds to eat something, they'd swarm us instantly, and we'd loudly scream obscenities.

We're staying with the family who let us use their hotel room for showers just outside Revelstoke and this guy is honestly one of the coolest people I've ever met. We just finished watching a really cool film with him called Buffalo '66. He's got this ugly cracked out dog named Sister, and as well as a collection of souped up Nerf guns. I like him a lot. Wish he could join us on or trek (he's a cyclist too).

Enjoy the uninspired pictureswhich includeam awesome table marker they gave me at breakfast, a mediocre view of Calgary and Tue mountains in the distance.

Update: John and I just realized that we completed the first 1000 km sometime this day. 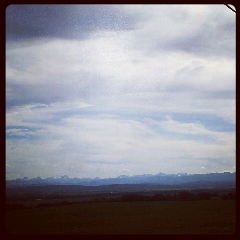 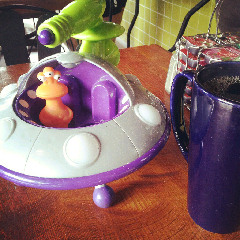 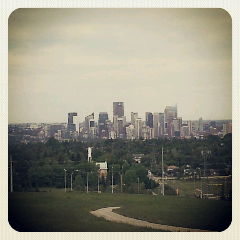